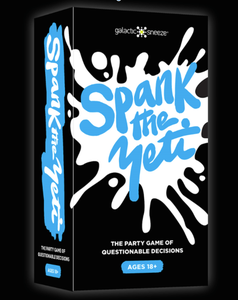 Spank the Yeti: The Adult Party Game of Questionable Decisions

"Would you dumpster hump a robot, eat the dingleberries of a coked-out unicorn, and joust Tarzan? Or, maybe you would hump the unicorn, joust the robot, and snack on Tarzan's dingleberries?!

Spank the Yeti is inspired by the popular parlor game, F*ck, Marry, Kill. Each round, one player pairs up three Action Cards with three Object Cards (people, creatures, and things), and the other players try to correctly predict his or her answers. You don’t really know your friends until you know whose dingleberries they'd eat."

Save this product for later